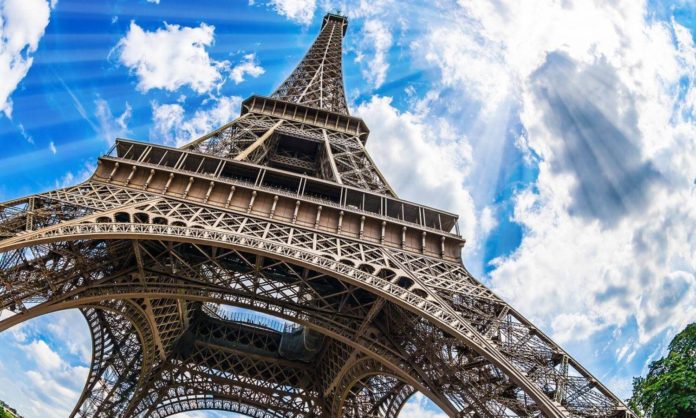 It has been called a technological masterpiece in building-construction history. Built in commemoration of the French Revolution, the Eiffel Tower is one of the world’s premier tourist attractions. It has been compared to the Great Pyramid of Giza and St. Peter’s Basilica in Rome. Nothing remotely like it has ever been constructed.

The tower is located on the Left Bank of the Seine River, at the northwestern extreme of the Parc du Champ de Mars, a park in front of the École Militaire that used to be a military parade ground.

To truly appreciate this marvelous structure, let’s discuss its history.

The tower was built for the Paris World’s Fair in 1889. When the French Government was organizing this event, a competition was held for designs for a suitable monument. Over 100 designs were submitted, and the World’s Fair Committee selected the conception of a 984 foot (300 meter) open-lattice wrought iron tower.

This design was the creation of Alexendre-Gustave Eiffel. He was a renown French civil engineer who specialized in metal construction. His previous works included an iron bridge at Bordeaux, the 540 foot (162 meter) Garabit viaduct, the moveable dome at the observatory in Nice, and the framework of the Statue of Liberty in New York Harbor.

Eiffel startled the world with the construction of the tower. In contrast to such older monuments, Eiffel’s tower was completed in a matter of months with a small labor force. Eiffel made use of advanced knowledge of the behavior of metal arch and metal truss form under loading, including wind forces.

His results started a revolution in civil engineering and architectural design. With the completion of the tower, Eiffel earned the nickname, “magician of iron.” The tower was almost torn down on several occasions and despite long and continuous protests, the tower vindicated itself aesthetically. With the advent of radio and television, the Eiffel Tower gained even greater importance as a transmission tower. For many years, it was the tallest man-made structure on earth.

This tower’s dimensions are remarkable.

It is still the tallest structure in Paris by a very wide margin.

Its size is very deceiving since there are no other structures close to it.

From the summit, you can see as far away as Chartres (to the southwest) on a clear day. The base of the tower covers a square area of 328 feet (100 meters) on a side. You can stand in the center of the area at the base and look directly up at the floor of the second level, 38 stories above.

The tower is built of puddled iron (very pure structural iron), and weights 7300 metric tons. It is extremely light.

The tower actually weighs less than the air that surrounds it! If a scale model of the tower one foot (30 cm) high were constructed, it would weigh only as much as a nickel (seven grams)!

The four pillars supporting the tower are aligned to the points of the compass. You can use the tower as a reference to find you way in Paris. Another unique feature is the tower’s base.

The four semi-circular arches required elevators to ascend on a curve. The glass-cage machines were designed by the Otis Elevator Company of the United States. These elevators provide visitors a fantastic view as they ride to the top of the tower.

This tower moves in the wind. On days with high, gusting winds, the wind can reach speeds in excess of 100 mph (160 kph) at the summit of the tower. Visitors can feel the tower swaying gently at the summit.

Under such wind conditions, the tower is usually closed to the public, although there is always an engineer present at the summit to monitor telecommunications equipment. The magnitude of the sway in the tower, under worst-case conditions, is about six inches (15 cm).

There is no danger of the tower being damaged by wind-induced movement since it is designed to withstand movements easily five times beyond those produced by the highest winds ever recorded. Today, the movements are monitored by a laser alignment system. The tower also leans very slightly in bright sunlight, as one side is heated by the sun and expands slightly.

A Bit of History

The Eiffel Tower was built for the International Exhibition of Paris of 1889 commemorating the centenary of the French Revolution. The Prince of Wales, later King Edward VII of England, opened the tower. Of the 700 proposals submitted in a design competition, Gustave Eiffel’s was unanimously chosen.

However it was not accepted by all at first, and a petition of 300 names – including those of Maupassant, Emile Zola, Charles Garnier (architect of the Opéra Garnier), and Dumas the Younger – protested its construction.

It was almost torn down in 1909, but was saved because of its antenna – used for telegraphy at that time. Beginning in 1910 it became part of the International Time Service. French radio (since 1918), and French television (since 1957) have also made use of its stature.

During its lifetime, the Eiffel Tower has also witnessed a few strange scenes, including being scaled by a mountaineer in 1954, and parachuted off of in 1984 by two Englishmen. In 1923 a journalist rode a bicycle down from the first level. Some accounts say he rode down the stairs, other accounts suggest the exterior of one of the tower’s four legs which slope outward.

However, if its birth was difficult, it is now completely accepted and must be listed as one of the symbols of Paris itself.

The tower has three platforms. A restaurant (extremely expensive; reservations absolutely necessary), the Jules Verne is on the second platform. The top platform has a bar, souvenir shop, and the (recently restored) office of Gustave Eiffel.

From its platforms – especially the topmost – the view upon Paris is superb. It is generally agreed that one hour before sunset, the panorama is at its best.

After the debacle of the Panama Canal with Ferdinand De Lessups, Gustave Eiffel began to experiment with enterprises to prove the usefulness of his tower. He had begun to develop a passionate interest in that which, at the turn of the century, was considered avant-garde science: meteorology, radiotelegraphy and aerodynamics.

In 1889, M. Eiffel began to fit the peak of the tower as an observation station to measure the speed of wind. He also encouraged several scientific experiments including Foucault’s giant pendulum, a mercury barometer and the first experiment of radio transmission. In 1898, Eugene Ducretet at the Pantheon, received signals from the tower.

After M. Eiffel had experimented in the field of meterology, he begun to look at the effects of wind and air resistance, the science that would later be termed aerodynamics, which has become a large part of both military and commerical aviation as well as rocket technology. Gustave Eiffel imagined an automatic device sliding along a cable that was stretched between the ground and the second floor of the Eiffel Tower.

The limited capacity of the available measuring instruments, led M. Eiffel to a more sophisticated knowledge in aviation and, eventually, to wind tunnel experiments. He built a wind tunnel on the Champ de Mars, which was in use from 1909-1911. The tunnel was sufficient for lab experiments bit inadequate for the study of airplanes. However, with the help of several other engineers, Leon Rith, Lapresle, and Eiffel made over 5,000 tests in this lab. Almost all the pioneers of aviation tested in this wind tunnel.

In 1911, a better wind tunnel which is still in use was built and between 1912-1914, Eiffel began experiments with military equipment for WWI fighter planes. In 1917, the Eiffel Laboratory designed a very advanced monoplane chaser of which two prototypes were built in Breguet. One crashed due to pilot error.

M. Eiffel was a contemporary of Samuel Langeley, the president of the Smithstonian Institute, for whom the NASA field center Langely Research Center was named. Much of Eiffel’s work had gone on to help expand the science of aerodynamics. NASA used many propeller and wind tunnel experiments in their trainer planes for astronauts.

Betrand Lemoine: Gustave Eiffel, Constructor Impimerie Alenconnaise 2 rue Edouard-Belin, 1988
Joseph Harriss, The Tallest Tower: Eiffel & The Belle Epoque Regnery Gateway (Washington, 1975).
Aviation Economics course: SUNY Farmingdale, taught by Professor Lavorata, 1994.
Safety during the Construction of the Eiffel Tower
From “The Tallest Tower” by Joseph Harriss:
“Eiffel’s execution had been marked by a deftness unique in the annals of great engineering projects. His clockwork precision had enabled him not only to meet his deadline, but to build the vertiguous structure with the loss of only one life, that of a worker who fell from the first platform while apparently showing off for his girlfriend after the bell had sounded ending the working day.”

A noted constructor of bridges and viaducts, he also designed the Eiffel Tower and the internal structure of the Statue of Liberty. He was initially charged with corruption in the 1888 scandal of Ferdinand de Lesseps’s failed Panama Canal project. Lesseps (1805-1894), the successful promoter and construction supervisor for the Suez Canal (1859-69), later assumed presidency of the French company building the Panama Canal starting in 1881. Eiffel was hired to provide engineering services for the project. Seven year later the project was forced into bankruptcy amid charges of corruption. Lesseps was sentenced to prison for misappropriation of funds, but the sentence was not carried out. Eiffel was cleared of all wrongdoing by a French appeals court in 1893.

Nonetheless, he withdrew from commercial life and spent the rest of his years studying aerodynamics.